Sometimes, you just want the best gaming laptop $2,000 can buy. You want the latest CPU, the most RAM and the badest, beefiest GPU. You don’t want to compromise in terms of display, storage, and raw power. You want the best value for your investment and play games at High or Ultra.

Here’s what to look for when you want to buy the best gaming laptops under $2000:

Processor – While the 7th gen iteration of Intel processors (Kaby Lake) will prove itself capable of running any task, you should do a bit of future-proofing and get the 8th gen Cores (Coffee Lake) instead. Most of the laptops in this list are 8th gen, but if you’re on the fence and want a few extra dollars left over to buy gaming peripherals or equipment, then it may be wiser to get an older model.

Graphics Card – The MVP in a gaming laptop, the GPU handles the game graphics and all its details. You’ll want to get the best one according to your budget because unlike desktop PCs, you won’t be able to upgrade to newer cards later down the road. Top-tier graphics cards that fall into the $2,000 mark include GeForce GTX 1050s and up.

Display – Expect lots of lag and latency when you’re playing on a 4K screen. In gaming, the “sweet spot”, or the highest resolution one can play with on Ultra setting is either QHD (2560 x 1440) or FHD (1920 x 1080). The best $2k laptops must have IPS displays that offer brighter, crisper graphics, a wide, comfortable viewing range and a higher percentage of sRGB color.

Storage – SSDs or Solid State Drives are the first choices when you want a speedy gaming rig. They cut loading time significantly, which translates to a better gaming experience. Get a secondary hard disk drive as storage for all your games, music, videos and downloads.

Laptops in the 2,000 range should have equal or greater power than a desktop PC. These machines will have several advantages over their towering counterparts, including portability, a smaller footprint, and aftersales support.

The Acer Predator 17 is as good as it gets when you want to spend a few thousand dollars on a gaming machine. Acer has painted their gaming laptop entirely in black and red, making it look menacing and cool at the same time.

The hardware in the Darth Vader chassis packs a serious punch- you get a 7th gen i7-6700HQ Intel processor, 16GB of DDR4 RAM and a storage combo of 256 GB of SSD and 1 TB of HDD. The GPU is a high-performance GeForce GTX 1070 with Pascal architecture that’s VR ready. Gamers can enter a whole new world without so much a hiccup when they plug in a VR headset. On screen, the 17.3 inch HD display rocks a 1920 x 1080 resolution with the NVIDIA G-Sync technology, eliminating pesky issues such as tearing, lag and stuttering.

Extended gaming sessions tend to heat your laptop’s internals, but the Predator 17 keeps things cool with the ability to swap out the drives for a Cooler Master or Acer’s very own Predator Frostcore. You won’t find the Predator 17 lacking in the audio department- the Predator SoundPound comprises 4 speakers, two subwoofers blasted out via the Dolby Audio surround sound technology.

Last but not the least, you get a keyboard that’s backlit and completely programmable for a variety of game genres, a macro system and of course, typing and tactile accuracy that adds to the total experience. With the Predator 17, you get special proprietary software that enhances existing hardware. 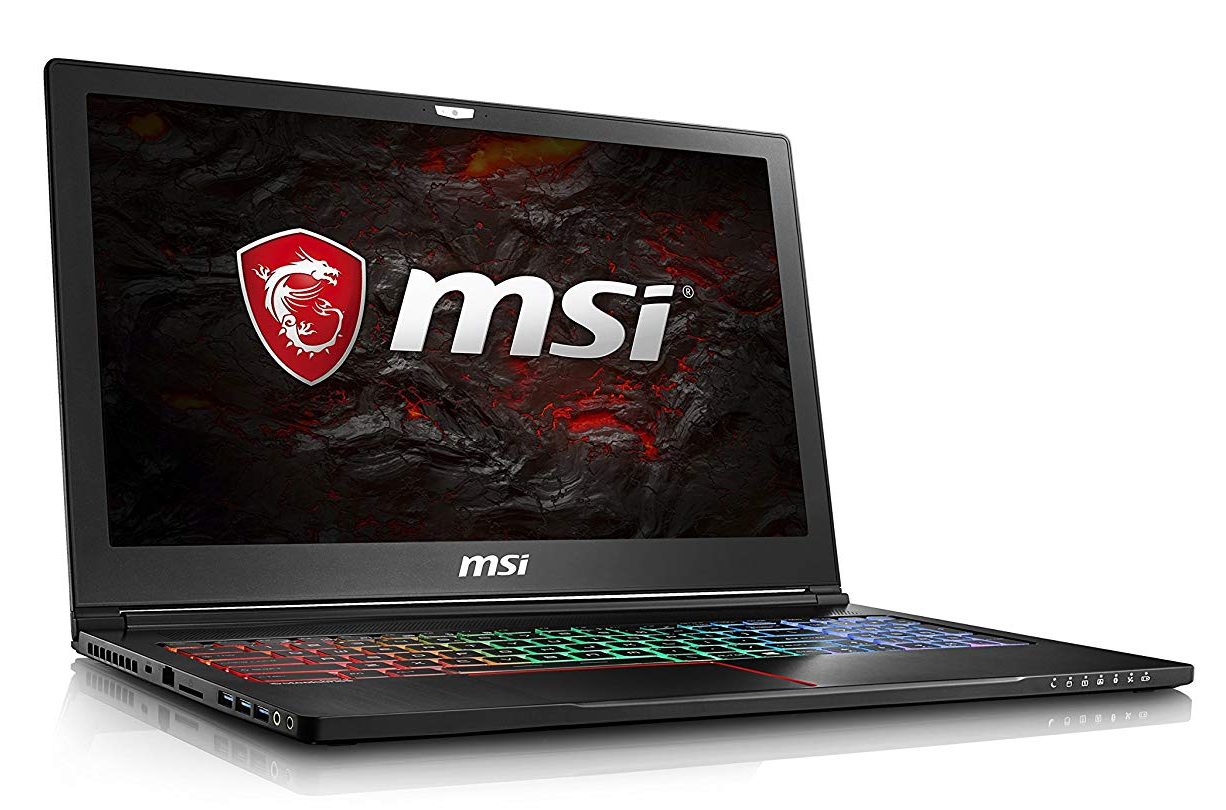 Owing to its name, the GS63VR Stealth is super-sleek and holds the distinction of being one of the slimmest gaming laptops in the market. MSI has also packed their machine with high-performance components that make short work of AAA game titles.

The MSI Stealth Pro 15.6″ may be advertised as a machine with “True 4K Gaming”, but it doesn’t have a true 4K display. 4K Level means that the screen boasts a full 100 percent in terms of color gamut, which translates to more glorious details, better clarity and vivid colors that seem to pop out. Moreover, the IPS technology allows for wide viewing at 3840 x 2160 resolution. It’s also VR Ready, so don’t be afraid to bust your VR headset out and take the GS63VR for a spin!

Inside the Stealth Pro lies a 7th generation i7 Intel core processor that can be boosted to a maximum of 3.8 GHz, 16 GB of DD4 RAM which is upgradeable to 32 GB and a whopping 512 GB of SSD coupled with 2 TB of HDD for storing all your games and downloads. Multi-tasking won’t feel like a chore at all- in fact, you’ll be curious to see what the laptop’s maximum ceiling is when you find that it doesn’t even beat an eyelash when you open multiple browsers, 2 to 3 programs, screen recording software and CAD or Photoshop all at the same time.

The GS63VR comes with one of the best keyboards around. MSI has specifically crafted a unique keyboard made from renowned gaming peripheral company SteelSeries. The result? A completely customizable, fully programmable anti-ghosting keyboard that has an elite response time and superb tactile feel. The full-color spectrum means you can choose any color and put it on any zone you like for a one-of-a-kind setup. 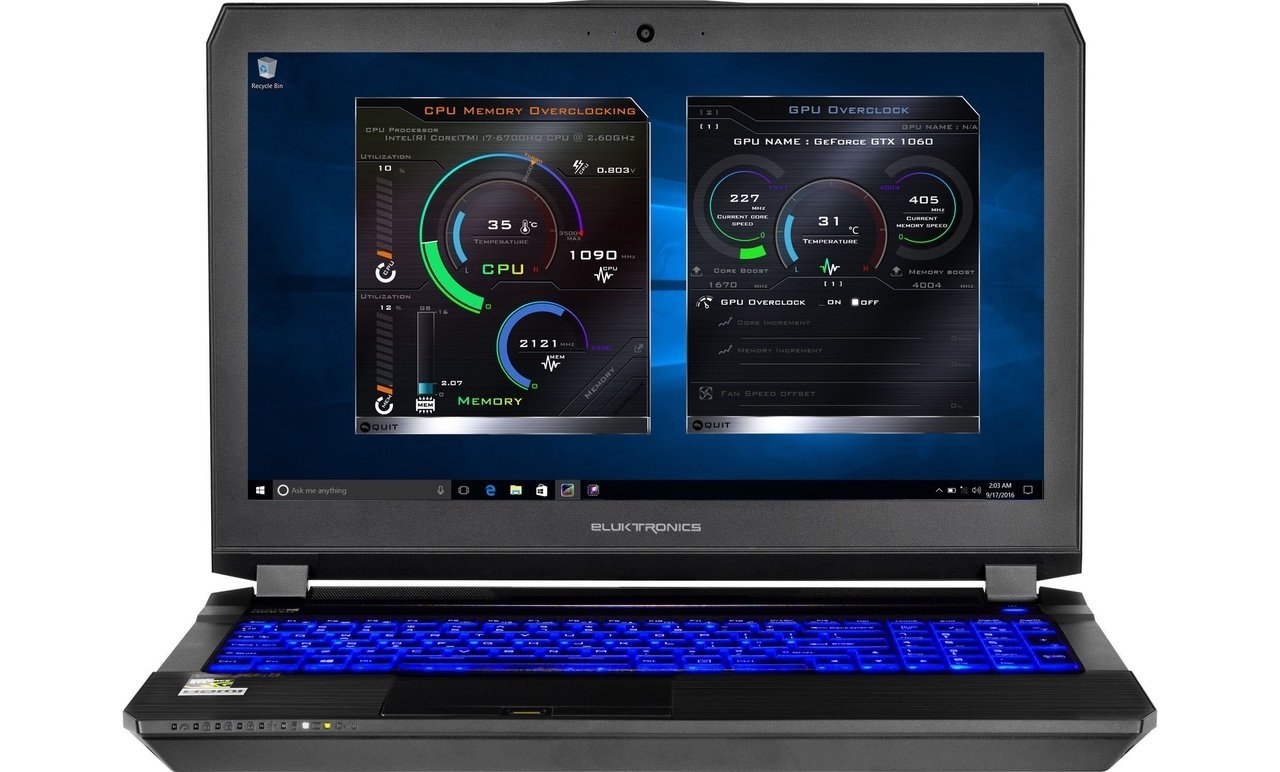 Eluktronics is a relative newcomer to the laptop industry, but they sure made a good impression with the release of the P650RP6 VR laptop. The price tag seems too good to be true for all the nifty components inside the machine, but that’s probably what makes it so appealing.

The P650RP6 comes in a few hardware configurations. There’s the i7-7700HQ Intel quad-core processor with 16 GB of DDR4 RAM and a 256 GB SSD and 1 TB HDD combo, and a more powerful version that includes an i7 Kaby Lake CPU and a Geforce GTX 1070 with 8 GB of GDDR5 memory. There’s also an i7 6700HQ variant that has 32 GB of DD4 RAM and a 1 TB HDD and 512 GB SSD combo, perfect for those who run a few dozen browsers, email client and memory-hungry apps all at once.

The gaming aspect of the P650RP6 is represented by the Nvidia Geforce GTX 1070 GPU, which churns out game pixels and graphics at a smooth 60 fps in Max or Ultra Settings. You’ll see the games on a crisp and vivid 15.6 inch full HD IPS screen with anti-glare technology. Eluktronics has trumped many other gaming laptops as their screen is better in terms of color reproduction and responsiveness.

On top of that, the manufacturer has crammed in a handful of essential gaming software and drivers, including DirectX 12, Vulkan, VR, ShadowPlay and Ansel. As you’ll pleasantly discover, the P650RP6 is VR ready out of the box and can run the most graphic-intensive VR games with little to no tweaking required.

Forget the brand and you’ll see a gaming laptop that has all the makings of a powerful machine. Choose the configuration that fits your needs and your budget and you’ll come away with a laptop that will serve you for a long, long time. 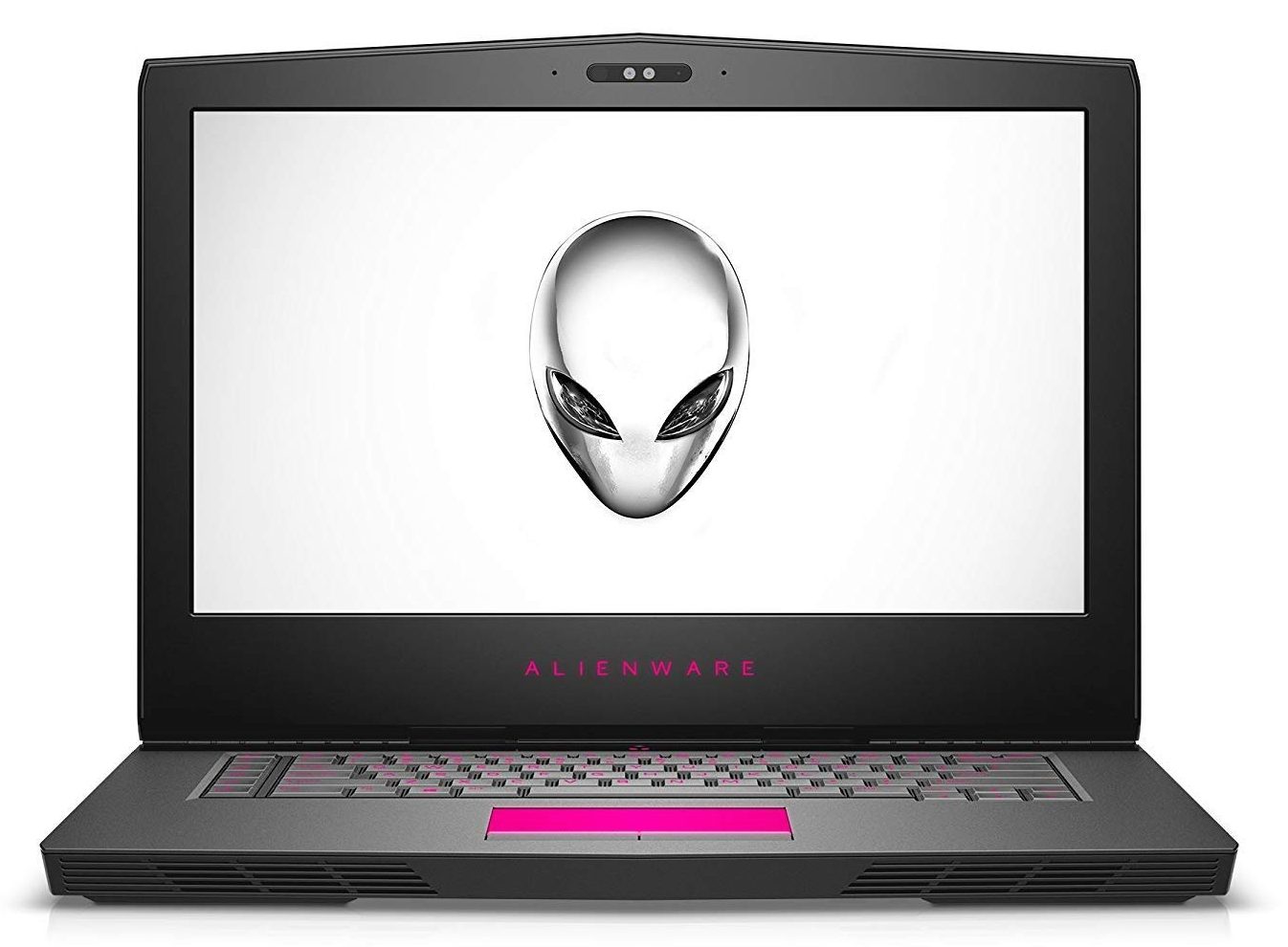 The 17 R4 Alienware retains its edgy chassis, but inside is a different matter. The new model sports a 7th gen Kaby Lake Intel processor paired with a Nvidia GTX 1070 (or 1080 for a different configuration) that can handle VR games with ease. If you can spare a few hundred dollars above the 2,000 mark, then you’ll find incredible value in the upgraded 17-inch versions.

Dell’s Alienware line has a trifecta of top-notch gaming performance, space-agey design, and a comfortable keyboard. The 17-inch configurations can get you an absolutely stunning display that can go from base 1920 x 1080 (which should be good enough for the newest games) to 2560 x 1440 resolution (which really brings out the detail in games and videos) with the G-Sync technology. The added cost can really make a difference in terms of brightness and sharpness. All in all, you can mix and match between several hardware components (GPU, RAM, Screen, and Storage) to create your very own gaming machine.

The Alienware logo on the cover, the light strips on the sides, the keyboard and the touchpad can be made to light up in different colors. Ports and connectivity options line the edges of the 17 R4- the left side houses a mic and headphone jack, a USB 3.0 port, a type-C USB and a Noble lock slot; the right side has a USB 3.0 port and heat vents; the back contains the power jack, a Thunderbolt 3, HDMI, a mini Display port, an ethernet jack and the proprietary Alienware Graphics Amp which allows for desktop GPUs to be attached for that extra oomph.

The included Tobii eye-tracking technology allows your eyes to navigate Windows and some supported games. 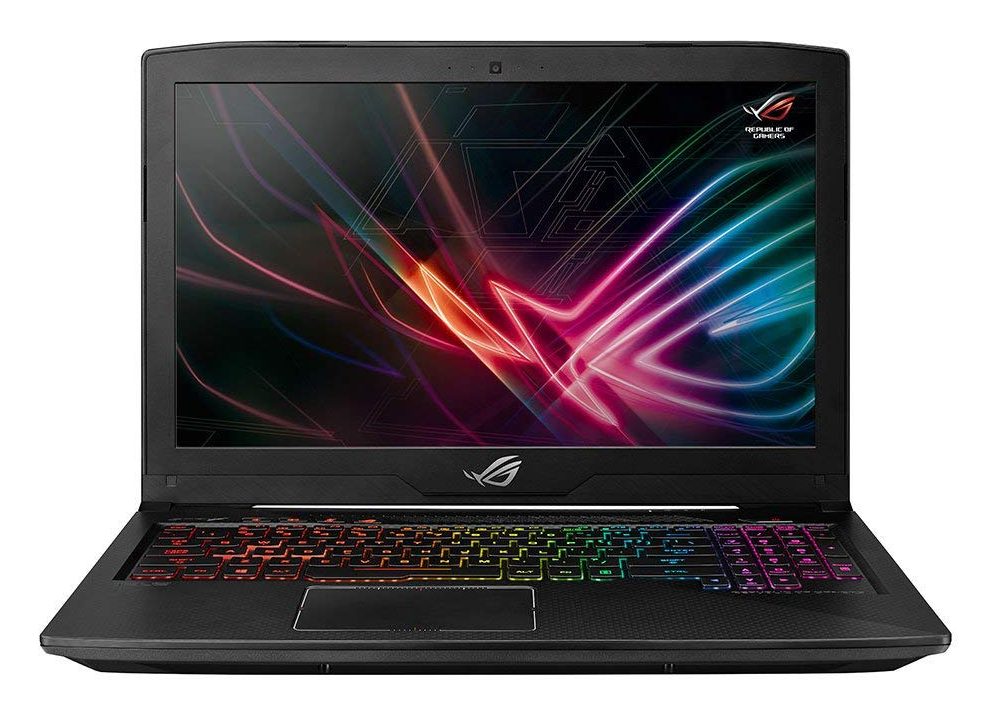 The ROG Strix SCAR II aims to go above its predecessor, the SCAR I by becoming the lightest and smallest gaming laptop in the world. Gamers who want the perfect mix of portability and performance will find a lot to like in this machine!

A smaller chassis means there are fewer hardware components that can fit in, but when you get to know the ROG GL504GS you’ll be surprised at how well it can churn out those gorgeous graphics. The display puts out 1920 x 1080 resolution at 144 Hz, which is higher than most other gaming laptops in the same price range. The processor has been upgraded to the newer i7-8750H 6-core Intel Coffee Lake CPU with a capable Geforce GTX 1070 with 8 GB of VRAM in place. The whole setup is VR ready right out of the box.

The SCAR II’s shell is made up of an anodized mystic black and a hairline brush finish, referred by ASUS as their “SLASH Dual Surface Treatment”. At the keyboard helm, there’s a strip of light running the whole length. The keyboard itself is full-sized and features RGB illumination. This time, the trackpad is perfectly positioned for maximum ergonomics instead of being in the way.

The heat that comes from the hardware makes its way out the vents. You won’t feel uncomfortable during long gaming sessions because it’s the bottom that gets hot, but thankfully the temperature around the keyboard and the palm areas are unaffected.

The best laptops under $2,000 aren’t just for gaming. You can turn them into portable workhorses that will prove to be more than adequate for GPU-intensive tasks such as video editing, Photoshop, CAD and rendering. The generous RAM makes multi-tasking a joy. You can zip around multiple applications without slowing down or experiencing any lag.